The Innovation Award of the administrative district Schaumburg has been given to CMR oatings.
Their developement of a water-based protective lacquer for refinement of synthetic materials
and plastic films prevailed against 8 competitors.

The Rinteln company „CMR Coatings“ has won the Schaumburg Innovation Award 2007. The Company  developed a lacquer for automotive films, which has an intensive brightness and coincidently is quite insensitive against the exposure of sunlight. Second place was given to Adaptronic, Wiedensahl,  and third place to Hautau GmbH, Helpsen.

Landrat (district administrator) Heinz-Gerhard Schöttelndreier said before the awarding, during the panel of craftsmen on the regional show: “I would like to thank all candidates for their courage and efforts. They all should deserve this award.” 9 companies from this district applied for the Innovation Award 2007 with their new product developements. For this competition innovations out of the sectors technology and production, distribution, human resorce management or Organisation could be subscribed, as well as companies who in their entirety break fresh ground.
The assessment committee consisted of: Heinz-Gerhard Schöttelndreier (Landrat /district administrator), Hermann Stoevesandt (Vorsitzender des Wirtschaftsausschusses Landkreis Schaumburg der IHK Hannover / president of the Schaumburg economic committee at the chamber of industry and commerce of Hannover), Brigitte Bödeker (Kreistagsabgeordnete / representative from the country council) and Jens Glue (Geschäftsführer des Produktionstechnischen Zentrums / general manager of Produktionstechnisches Zentrum).

Hermann Stoevesandt emphasized before proclamation of the winners, that all of the 9 candidates submitted projects of outstanding quality. According to this the decision has been difficult. Also for this reason, the jury decided to spread the award, which includes prize money of 6000,- EURO on three competitors.

„CMR Coatings“ got 3000 EURO for their new developed lacquer for automotive films. The staff worked out a film, which comes to a compromise between two hardly compatible principles. On the one hand it shines in brilliant colours, on the other hand this brilliance is permanent and does not fade so fast under exposure of sunlight. The advantage is, that these films, mounted on police-, fire department- and ambulance vehicles, has not to be changed so often. So the concerned institutions are able to save money and the environmental pollution gets less.

Second place was given to Adaptronic, who developed a solid, versatile and cheap adapter for
automotive and supplier industry. It simplifies measuring and checking operations in automotive engineering, which consists more and more of electronic parts. This innovation of the Wiedensahl company has been awarded with 2000 EURO by the jury. Third place and an award of 1000 EURO was given to Hautau from Helpsen for an automatic tilt / slide metal mount for French doors, so a slide door can be opened at the touch of a button or by remote control. 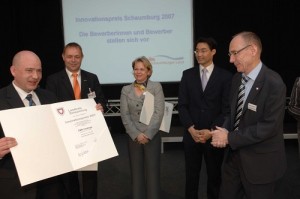